CANADA, USA AND NATO ACTIVE SUPPORT FOR NEO-NAZIS TERRORISTS IN UKRAINE
Share This

JULY 06, 2019 – Over the past few months, NATO’s Jens Stoltenberg has continued outlining his organization’s “recognition” for Ukraine “to become a member of NATO”. Two weeks ago Stoltenberg pronounced publicly in Washington that “we work with Ukraine to help Ukraine move forward towards its transatlantic integration… we have trust funds, we have training, we have different kinds of activities which we are helping Ukraine.

Comments like this are also a well-aimed provocation of nearby Russia. It is the equivalent of the Soviet Union having announced they had “trust funds” and “activities” occurring in Mexico, with the ultimate aim of luring America’s neighbour into the Moscow-led Warsaw Pact. Any such coercion by the Soviets would surely have drawn a swift military response from Washington.

It can occasionally be instructive to cast one’s eyes over a map of Europe, and a quick glance at the Ukraine reveals a long and winding border to the east with Russia; approximately 1,000 kilometres altogether no less. The Ukraine furthermore holds a generations-long history and association with Russia.

During the First World War, 3.5 million Ukrainians fought in the Imperial Russian Army, primarily in opposition to a German Empire which became a military dictatorship run by Paul von Hindenburg and Erich Ludendorff – from late 1917 Tsarist forces ceased to exist as the October Revolution was implemented, ushering in the creation of Soviet Russia.

Over two decades later, up to seven million Ukrainian soldiers joined the Red Army during its “Great Patriotic War” against the Nazis. By 1945, around 2.5 million Ukrainian infantrymen within Soviet armies were killed by Hitler’s troops. The Ukraine’s young foot soldiers paid a heavy price indeed for their contribution in liberating Soviet lands from Nazi rule. 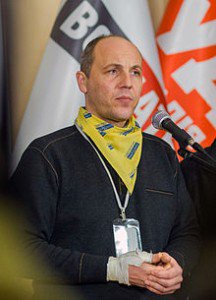 It has been rather galling, as a consequence, to witness the Ukraine in recent years led by a throng embedded with fascist figures – individuals with many years of neo-Nazi activism under their belts, such as Andriy Parubiy, Chairman of the Ukraine’s Parliament since April 2016 and co-founder of the fascist Svoboda party. Parubiy is an old associate of other neo-Nazis such as Svoboda chief Oleh Tyahnybok, Oleh Makhnitskyiand Dmytro Yarosh, the latter a Ukrainian Member of Parliament (MP) since late 2014 and a former leader of Right Sector, another fascist party.

These men are all followers of the terrorist Stepan Bandera, a Ukrainian Nazi who collaborated with the Third Reich before and during World War II. In early July 1941, with German soldiers pouring forward onto the frontiers of western Ukraine, Bandera’s “Act of Proclamation” declared,

“The newly formed Ukrainian state will work closely with the National Socialist-Greater Germany” and that Hitler “is forming a new order in Europe and the world and is helping the Ukrainian People to free itself from Moscovite occupation”.

In the postwar years, Bandera and his cronies received extensive protection from the Allied victors, enjoying significant aid and support from American and British intelligence services, the CIA and MI6.

For the meantime, Stoltenberg himself met recently with fascist Ukrainian MP Parubiy; as the NATO chief revealed via his twitter account on 27 November 2018, while he warmly shakes hands with him.

toltenberg is a former social-democratic Norwegian prime minister, who in his youth actively protested the Vietnam War. He has for years been servile to Washington’s whims, and is seemingly comfortable mingling with neo-Nazis under the NATO banner.

Almost all of the Ukraine’s far-right extremists are supporters of NATO and American-led military intervention, whilst many of them have enjoyed trips to see their de facto bosses in America. This includes Parubiy who visited Washington last summer, and he was previously in the US capital during February 2015, where he met among others senator John McCain and John Boehner, then speaker of the House. In the same outing, Parubiy held top level meetings with the US Department of State, Department of Defense and National Security Council. He was graced too with interviews from the editorial boards of the Washington Post and Wall Street Journal.

Read more: This Is the Real, Americanized, Nazi, Ukraine

Parubiy was invited to Ottawa, Canada in February 2016, and can be seen smiling in photographs with prime minister Justin Trudeau. In November 2018 Parubiy had discussions with Antonio Tajani, president of the European Parliament – where Parubiy called on Brussels to strengthen sanctions against Russia, while he pushed forward with proposals for the Ukraine to eventually join both NATO and the EU, moves welcomed by Tajani.

In February 2019, EU Council President Donald Tusk was in Kiev where he spoke to the national parliament, and highlighted among other things that Ukrainian MPs should “be resolute in rejecting the lure of radical nationalism and populism, as you have done so far”. Tusk was seemingly unaware some of those he was addressing hold rather more extreme outlooks than that of “radical nationalists” or “populists”. Indeed, Parubiy himself could be viewed sitting directly in the background while Tusk was speaking.

Prior to the American-led coup in the Ukraine (confirmed by Barack Obama on CNN), it was clear that this action would increase the risk of nuclear war between the US and Russia. It is again by the grace of luck that such a devastating encounter has been avoided. The putsch represented a major antagonization of Russia, which has been a nuclear superpower for decades with understandable concerns relating to what occurs along its boundaries.

The US stations many dozens of its nuclear weapons in four EU and NATO countries: Germany, Italy, the Netherlands and Belgium; and also in NATO country Turkey; bringing the total number of nuclear states in reality to over a dozen. The presence of nuclear devices in the countries above constitutes the most serious violation of their sovereignty, while further endangering Europe and the globe.

Despite a heightened risk of nuclear war, the Ukraine crisis has enjoyed consistent Western backing from the beginning. Many press reports regarding the Ukraine are of a particularly propagandist nature, describing the illegal overthrow of an elected leader as a “pro-western revolution” with Russia alone “fomenting a war in eastern Ukraine that has now killed more than 10,300 people and displaced 1.6 million”.

There is not a word explicated in these substandard accounts pertaining to crucial American involvement in the country. No comment is to be read either relating to the Western-supported neo-Nazi units fighting Moscow-backed separatists in eastern Ukraine; such as white supremacists known as the Azov Battalion and Donbas Battalion, which comprise part of the National Guard of Ukraine – along with other Nazi-style squadrons like the Aidar Battalion, that belongs to the Ukrainian Ground Forces. The Dnipro Battalion has provided support too, and is commanded by the above-mentioned far-right Ukrainian MP, Yuriy Bereza.

Rather, the readers are led to believe that it is Russia alone which has been “fomenting a war in eastern Ukraine”. Also unreported are the war crimes committed by the Azov, Donbas, Aidar and Dnipro battalions against Ukrainian civilians, which have gone unpunished; such as murder, torture, sexual assault and deliberate starvation of civilians. The Donbas Battalion commander Semen Semenchenko – another far-right figurehead and Ukrainian MP – has received invitations to America where he saw members of Congress and Pentagon representatives, while seeking “non-lethal aid” from the US.

In September 2014 Semenchenko said that, “I want to make Ukraine into another Israel”. Over four years ago, he was elected as a parliamentary deputy, a position he continues to hold. In December 2018, it was reported that Semenchenko was briefly detained in Tbilisi, Georgia while illegally attempting to purchase weapons there, and avoided arrest due to his possession of a diplomatic passport. President Petro Poroshenko previously praised the much-decorated Semenchenko for his “courage, commander’s endurance and moral fibre” while also eulogizing the Donbas Battalion as “real heroes”.

Poroshenko is in actual fact a US-sponsored proxy leader who has sought NATO and EU membership; he is moreover an ally of Israel, having repeatedly visited the expansionist state, and signed a “free trade agreement” during another trip to Israel in January this year. Poroshenko has toured the US many times, including a particularly ingratiating visit to the White House in June 2017, where president Donald Trump was apparently reluctant to meet him.

Relating to America’s role in the Ukraine, perhaps one should not be too surprised that the superpower implemented an administration with strong neo-Nazi links. US governments and their special services have a history of cooperation with Nazi henchmen dating to the conclusion of World War II. The US State Department and CIA worked willingly with former Nazis like General Reinhard Gehlen and “Butcher of Lyon” Klaus Barbie, employing them in the east to again destabilize the Soviet Union.

In the Ukraine, its 21st century fascist battalions receive much of their funding from oligarchs with ties to the West; such as powerful billionaire businessman Ihor Kolomoyskyi, who is a Ukrainian-Israeli-Cypriot citizen with a US visa and he has spent periods living in America – where he holds vested corporate interests in states like Ohio and West Virginia.

Kolomoyskyi is presently being investigated by the FBI after being accused of “ordering contract killings” along with undergoing probes relating to claims of “financial crimes”, such as embezzlement and the laundering of money into America. Kolomoyskyi is thought to be firmly supporting the campaign of comic actor Volodymyr Zelensky, favourite to become the Ukraine’s new head of state next week.

Kolomoskyi has ownership of major television networks in the Ukraine, which have provided Zelensky with a crucial platform so as to communicate with the nation’s populace. Zelensky has been compelled to deny his connections to Kolomoyskyi, but Poroshenko inevitably pounces upon these ties in order to score political points.

Though the Ukraine as a state was far from an idyllic one under the ousted Viktor Yanukovych, conditions have noticeably deteriorated since the June 2014 assumption to power of Poroshenko. Corruption and avarice have increased, so too crime and homelessness, numerous neo-Nazis have gained positions in parliament, the general population is suffering from worsening poverty and disillusionment while state services disintegrate.

Led by a billionaire oligarch for almost five years, the Ukraine is today Europe’s poorest nation with about 60% of its people living below the poverty line. Not much of this bothers privileged elites, so long as the country remains benevolent to wealthy business interests.

Once more, little of these uncomfortable realities are ever covered in press articles. Entering 2019 and the New York Times, on 24 January, is still elaborating on its “pro-Western revolution” line, while denouncing former president Yanukovych as “a widely reviled figure”. The New York Times carefully avoids bestowing such a title upon Poroshenko, in spite of his being a more “widely reviled figure” than Yanukovych.

Just prior to his toppling in early 2014, Yanukovych’s approval ratings stood at 20%. Less than a month ago, Poroshenko’s popularity ratings were once more recorded at less than half that at 9%, making this ranking a “world low” for a government leader.

Due to further non-existent reporting, first world populations are likely unaware of these statistics. Neither are they fully in tune to the atrocious mess the Ukraine is in today, which can largely be traced to the “pro-democracy Revolution”.

Hitler mesmorized the West and Europe while he started to slaughter ethnics and Jews and here in 2019 we are about to see the Neo-Nazis in Ukraine commit mass murder supported by arms from Canada, USA and Europe.

NEVER AGAIN is happening now in Ukraine who was the aupporter of the Nazis as they slaughtered Russians and Jews.